Winter can be tough. Sure, you get to wear cosy scarves and attractive coloured stockings, drink mulled wine and snuggle up beneath the bed covers, but it’s a long, long time without sunshine or flowers or blue skies. I never quite grasp the cumulative effect of grey days until that first burst of spring. It’s then that I sense liberation and lightness, as if the weight of the gloomy skies has been lifted.
This year, to circumvent any covert winter depression, we escape to Bali. We are met by our host and her driver in steamy, hectic Denpasar, from where we set off to Ubud. Locals refer to Ubud as the heart of Bali. It’s a spiritual centre as much as a geographic one.
on our drive on our drive on our drive on our drive on our drive on our drive On our drive, we cross an old stone bridge. My companion shivers. She’s not sure why. It’s then that our driver, Putu, begins to narrate the tale of the ghost mechanic. The story goes that a mechanic appears one dark night to help a lone stranger whose motorbike has broken down on the bridge. He takes the driver to his repair shop where he fixes the bike, and the stranger drives away. The next night, the driver comes back to thank the mechanic. He searches along the bridge, he returns to the location of the repair shop, but there is nothing there, and no mechanic to be found. 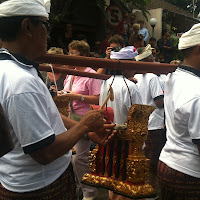 around ubud offerings   Around Ubud, offerings are left on doorsteps, footpaths, in shrines. A woman and a group of children, accompanied by a rooster and several dogs, enter our villa compound and leave clusters of small, brightly coloured flowers in a palm basket on the grass outside our rooms. They wave the incense above the offering as it burns, and smile at us when they leave. 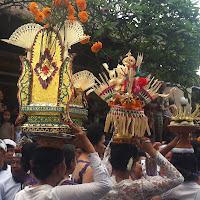 in the In the morning I awake to the open-air room filling with acrid smoke from a fire lit on the neighbour’s property. The day is a significant one, when public cremation ceremonies are performed. I wonder if this fire is part of the ritual. My companion and I are told that cremation is very expensive in Bali, so a ceremony takes place every year or two. Bodies are exhumed for the occasion. The souls of those dead are released in a mass ceremony of gamelan music, procession and burning. Large and elaborate pyres are carried through the streets to the temple. 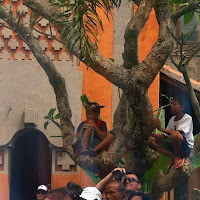 that night at that night at that night at That night at Ubud Palace I am in awe at the enormous scaffold set up from which people mounted the large royal cremation float earlier that day. Some of the floats for significant dead are so large it takes hundreds of people to bear the weight of them through the streets. The evening’s performance of Legong dance at the palace draws a horde of tourists. The musicians look weary from their relentless calendar of performances, but it’s a vibrant show. Each dance tells a tale featuring different characters: warriors, lovers, sprits and demons.
later our moto later our moto later our moto Later, our moto driver tells us that a man was crushed under the weight of one of the cremation floats as it fell on him that day. He tells us, too, that both his parents were cremated in the ceremony. He reveals this in a matter-of-fact way that I interpret as acceptance. The dead pass out of this world and their spirit is freed. The cycle of life and death continues.
we arrive back later our moto When we arrive back in Melbourne ten days later, it is cold. It is still winter. We pull on our scarves and wait for inevitable spring.

Posted by little collisions at 10:18 AM No comments: