a theatre of light

IT’s a night like any other. A bar. Some drinks. Many conversations with friends. This bar, however, is not like any other. It has a cinema out the back. We take our drinks and sit there, two of us, in the empty space, with the midnight conversations dulled behind us. The space is functional, utilitarian, but there is a lamp lit in one corner that transforms quotidian objects into luminous, burnished lines that I covet for my camera lens. 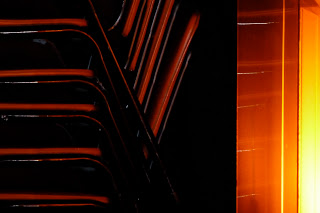 I wonder, what moves us to take photographs? Do we hope to seize the past, compose narratives, transform memory into something tangible? Are we trying to make evidence of events, capture the real, hold something up as ‘truth’? In many instances, taking a photograph is all of these things. Tourists in particular are good at this. Evidence. Narrative. Memories.

Beyond holiday snapshots, though, the eye is important. You have to see something first. You sense possibility, respond to, perhaps, the potential in the light, the colour, the composition. The photographer imagines how reality could be, not just how it is.

Some of my favourite things to photograph are everyday objects that have been set apart from the mundane, often by a trick of light. I can crave an image, like a predator who sets sights on its prey, tracks it and then cages it. Yet it’s not a sinister act. Although it is one of ownership. Control. Desire. 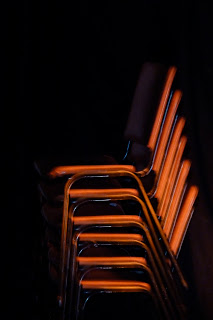 Chairs. I photographed the chairs. I found them beautiful. But to my friend they were no doubt quite ordinary. ‘I never would have photographed that’, he said, mystified. But when he saw how they were lit up in the photograph, he too loved what he saw.

In this way, photography is far from being a simple representation of reality. When we select a subject, choose the exposure, angle the camera, zoom in, it is an interpretation of what is real. We are a filter. When we delete an image, reposition the lens and take another shot – one we prefer, for whatever reason – we are imposing ourselves upon the image. 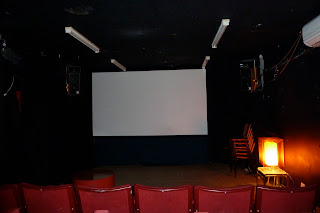 Posted by little collisions at 10:22 PM No comments: